Difference between revisions of "Confusion" 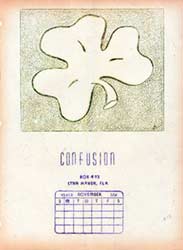 Confusion was first released in November of 1951 and in between that date and February of 1954, 16 issues were published. The zine then ceased publication for 51 years, returning in September of 2005 as an ezine with a slight variation on the name; it was now called confuSon, but still published by Shelby Vick.

Notable issues are #16 with a play by Bill Morse (Bull Moose) and Terry Wright called The Play's The Thing!, and an article on numbered fandom by Bob Silverberg (Spaceship). Confusion was an ambitious fanzine and included details such the feature "Up Our Sleeve". in which a mandarin's sleeve can be pulled back to reveal such surprises as a multi-coloured and carefully folded fan in issue 1, and pop-up hands in issue 11.

Vick is probably best known for the subject of #12, which celebrated the success of Shelby Vick's campaign to bring Irish fanzine editor Walt Willis to the United States, and launched the Trans Atlantic Fan Fund, a tradition that exists to this day.