Snowflakes in the Sun 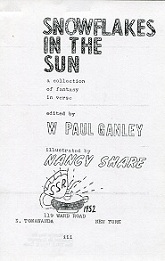 Snowflakes in the Sun was a one-issue-only poemzine edited by W. Paul Ganley.

It was published in North Towanda, New York, U.S.A., in 1952, though the preface is dated March 9, 1953. It is subtitled "A Collection of Fantasy Verse." In the preface, though, Ganley comments that "many of the poems herein belong to the realm of science-fiction."

Snowflakes in the Sun is dedicated to Al Leverentz, editor of Grotesque and Bob (Robert E.) Briney, editor of Cataclysm.

W. Paul Ganley also published the science fiction fanzine Fan-Fare during the 1950s. Later in the 1970s he returned to zine publishing with Eerie Country, which he released from 1976 to 1982, and with another poetry zine called Amanita Brandy, which saw 4 issues released between 1980 and 1999.