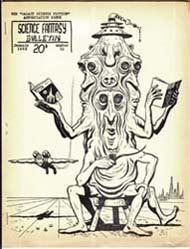 Originally titled Bulletin of the Cleveland Science Fantasy Society, it began life as the club bulletin. Ellison assumed editorship in 1952. After publishing five issues under that name, he changed the title to reflect the fact that it had become his zine rather than functioning as a club zine. He continued publishing Science Fantasy Bulletin till 1954, during which time nine issues were released. For the last three issues, the title was changed again to Dimensions - the first issue carrying this title was a split zine with Science Fantasy Bulletin.