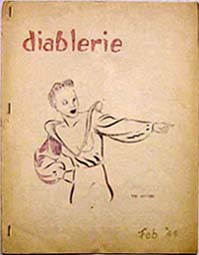 Diablerie was a science fiction fanzine by Bill "Willie" Watson.

According to Terry Carr (Entropy), writing in his column "Entropy Reprint" in Energumen #10, from May 1972: "Bill Watson was a San Francisco fan of the forties; his fanzine DIABLERIE appeared on all the polls for top fanzines of the time, but it's forgotten by most everybody but Harry Warner and me today. It doesn't deserve its obscurity; it was an exceptionally neatly produced fanzine, mimeographed with colour headings and illustrations. Some of the artwork, such as a drawing by Ronald Clyne, was offset and pasted in; and the 'About Our Contributors' section was illustrated by pasted-in photographs."

Also contributing was E. Hoffman Price. Terry Carr says, "For DIABLERIE, self-styled as 'fandom's Esquire,' he wrote connoisseur articles on brandies, tobaccos and so on, and a reminiscence about his friend Robert E. Howard." E. Hoffman Price was perhaps the only science fiction writer or fan to actually meet Howard.

Letters came from Clark Ashton Smith, among others.

Seven issues of Diablerie were published, the last one appearing in January 1945. One revival issue was also published in August 1958.

Bill Watson co-published, with George Ebey, the science fiction and horror poetry fanzine Sappho. On his own, he published the titles Chaos and Fantasy Amateur.