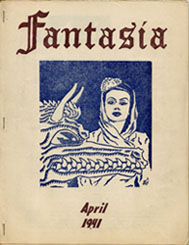 Fantasia was a science fiction and fantasy fanzine by Lou Goldstone.

Fantasia was published in the 1940s in San Francisco, California, U.S.A. Three issues were released, the first in 1940, and the last in July 1941. Associate Editors for the fanzine were George Cowin and Borrie Hyman.

Lou Goldstone was a prominent science fiction and fantasy artist who contributed art work to a number of fanzines, including Diablerie, aside from his commercial work for magazines and most particularly, for a number of notable science fiction book covers such as The Cosmic Geoids and One Other by John Taine, and Death's Deputy by L. Ron Hubbard. He is also well-known for being part of the crowd surrounding Jack Parsons and renting rooms on his estate.