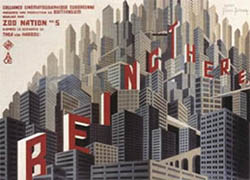 It was A5 in size with a colour cover from Issue 2 onwards, first published in February 2002 and ran for seven issues. Issue 7 came out in April 2006.