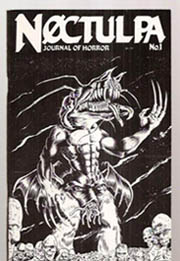 Noctulpa was a literary horror fanzine edited by George Hatch and published by Horror's Head Press.

Noctulpa, subtitled "Journal of Horror", was published in New York, U.S.A. The first issue appeared in 1987, and six issues followed as it was published into the 1990s. After issue 4, released in 1990, later issues were published as anthologies under different titles. Issue 5, from 1991, was called "Guignoir and Other Furies; issue 6, from 1992, was named "Souls In Pawn"; #7, from 1993, was titled "Sinistere".