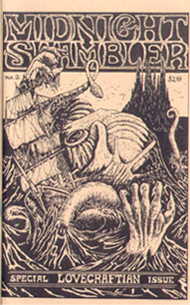 Midnight Shambler was first published in Salem, Oregon, U.S.A. in the 1980s. The editor for the first two issues, both released in 1988, was David Barker. Issue 2, from May 1988, was a special "Lovecraftian" issue, devoted to work within the Cthulhu Mythos. Midnight Shambler was revived in the 1990s by Robert M. Price, who published issue 3 in 1996, and continued to release issues throughout the 1990s from West Warwick, Rhode Island. Joseph S. Pulver was editor for the last issue, issue eleven, published in 1999.