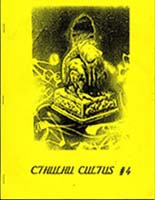 Cthulhu Cultus was a literary fanzine published by Philip Marsh and Tani Jantsang. The Associate Editor was James Ambuehl.

Cthulhu Cultus was published in Florida, U.S.A. The first issue appeared in 1995. It was devoted to weird, supernatural and horror fiction and poetry with an emphasis on H. P. Lovecraft's Cthulhu Mythos.

Illustrations were done by T. Marsh.