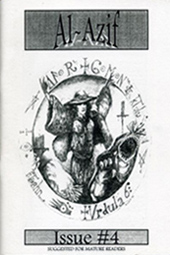 Al-Azif is a fantasy and horror fanzine edited by Peter A. Worthy and published in the UK by Yhtill Press.

Al-Azif was named after a fictional book that appears in H. P. Lovecraft's work, "A History of the Necronomicon". According to Lovecraft's pseudo-history, 'Al-Azif' was the original title of the "Necronomicon", written by Abdul Alhazred before his death in 738.

The work in Al-Azif are all stories and poems of the Cthulhu Mythos.

The first issue was dated January-February 1998, with the second issue following in March-April, the third in May-June, and the fourth and final issue in the last quarter of that same year.

The covers for issues 1, 2 and 3 were done by Stanley C. Sargent, and by Mike Minnis for issue 4. Interior illustrations were by Peter Worthy.