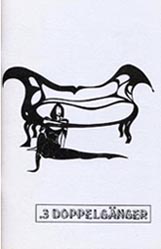 Doppelganger was a small press literary publication by various editors, devoted to the supernatural.

Doppelganger was published in the 1980's. It featured fiction, poetry, editorials, articles, art work, and reviews. 4 issues appeared under the editorship of Ronny P. Kaye, before he handed the publication over to John M. Benson and Anke M. Kriske, who released issue 5 in October 1985. In 1988, the couple turned over editorship to Janine Meyers.

The first issue appeared in September 1984. It included the first printing of "Linkage" by Mary Elizabeth Counselman, as well as writing by Anke M. Kriske and poetry by Jessica Amanda Salmonson (Fantasy Macabre). It also included the story "The Thing on the Couch", by Akrabu (pseudonym of editor Ronny P Kaye) considered by Edward P. Berglund to be an integral part of the Cthulhu Mythos, as well as work by Claudia Fontaine Grieco, Daniel Murphy, and George W. Smyth. The cover was by S. Fox.

Issue 2 was released in November 1984. It was illustrated by Paul D'Lubac. Fiction and poetry was by Gil Gordon, Walter Jarvis, Walter Shedlofsky (Inner Circle), and J.N. Williamson. Featured was the regular column, "Morbid History & Practice" by John M. Benson and Anke M. Kriske.

Issue 5 was published in October 1985, and was the first issue edited by John M. Benson and Anke M. Kriske.

John M. Benson also published Not One Of Us.