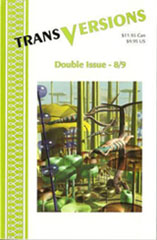 TransVersions was published in Victoria, British Columbia, Canada. It ran for twelve issues, from Autumn 1994 to 2000. The eighth and ninth issues were released as a double issue, and the final issue was dubbed "an anthology of new fantastic literature", and though not given an issue number, the editorial discusses it as an "issue" of TransVersions.