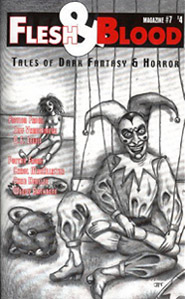 Flesh & Blood was published in Bayville, New Jersey, U.S.A. in the late 1990s and early 2000s. 17 issues appeared. With issue 13 it went from a small press publication to a newsstand publication.

Articles were by Jeff Roth.

Cover artwork was by Jamie Oberschlake, and Jeffrey Thomas, among others.

Interviews were featured in several issues including Issue 1 and 8 with Tom Piccirilli, editor of Epitaph, Issue 2 with Yvonne Navarro, Issue 3 with Ed Bryant, and Issue 4 with Poppy Z. Brite.