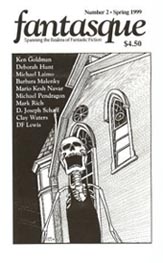 Fantasque was first published in January 1999 in Lititz, Pennsylvania, U.S.A. The last issue was #6, published in Autumn 2000. After this it was released as an annual anthology for a few years.