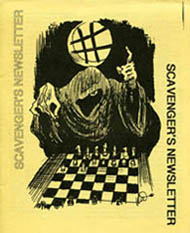 Scavenger's Newsletter was a literary newsletter by Janet Fox (1940-2009).

Five features were included in every issue: "The Scroungings", a listing of fanzines and small press publications sent in by editors looking for material, which was the main part of the newsletter; "Slim Pickin's", news about good and bad editors and magazines; "Junkmail", the letter column; and "Flea Market", the classifieds. Scavenger's Newsletter also regularly featured short stories and poems by authors of weird fiction, horror, science fiction, and tales of the Supernatural. Scavenger's Newsletter also featured a rotating review column which focused solely on the small press. This column, written in diverse styles due to the rotating nature was often the only place a writer, editor or artist within the small press would receive recognition. The columns were known for bringing to light arcane and eclectic magazines, books publishers, and editors.