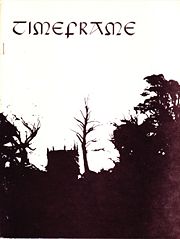 Timeframe is a fanzine by Evelyn Baker and Stephanie Bedwell-Grime.

The fanzine contained editorials, fiction, poetry, art work and letters of comment. Fan Fiction, featuring characters from televison shows and movies such as Battlestar Galactica, Indiana Jones, Star Trek (TOS}, Star Trek: The Next Generation, Star Wars, and Voyage to the Bottom of the Sea, as well as original science fiction was also featured.

Later, Stephanie Bedwell-Grime began to concentrate on horror fiction, and was nominated for the 2000 Aurora Award for Best Short-Form Work in English for her story "Skin Deep", which appeared in the January 1999 issue of Imelod. She has been a five-time finalist for the Aurora Awards, and has written ten novels and numerous short stories.