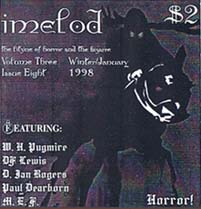 Imelod was a litzine of horror and the bizarre published in Scarborough, Ontario, Canada, by Todd H.C. Fisher.

Imelod was subtitled "the litzine of Mythosian horror" and was dedicated to H. P. Lovecraft's Cthulhu Mythos. 17 issues appeared between the years 1996 and 2000.

Art was by Mark A. Damicis, Toren G. Atkinson, and Chris Woods.

Stephanie Bedwell-Grime was nominated for the 2000 Aurora Award for Best Short-Form Work in English for her story Skin Deep, which appeared in the January 1999 issue of Imelod.