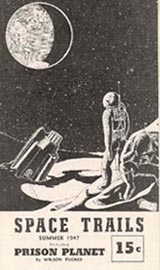 Space Trails was a science fiction and fantasy fanzine by Kenneth J. Krueger (1926-2009).

Subtitled "The Magazine of the Future", the first issue of Space Trails appeared in Summer of 1947, published in Buffalo, New York, U.S.A. Five issues were published, the fifth and last issue in 1953.

Krueger was also a book publisher, first with the "Buffalo Book Company", and then "Shroud", publishing the first book version of H. P. Lovecraft's Dream Quest of Unknown Kadath, and finally as "Kenneth J. Krueger: Publisher". He was also the editor of the poetry anthology Starbound! Poems of Science-Fiction, Fantasy and Terror, published in 1954 by Pegasus Publications as "The Space Trails Series #6", one of a handful of very early science fiction and fantasy poetry collections.

Earl Terry Kemp, writing in el, says, "Ken Krueger is one of the unsung heroes of science fiction and fandom."