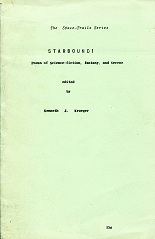 Starbound! was the sixth publication in Kenneth J. Krueger's The Space-Trails Series of science fiction pamphlets. It was published in 1954 under Krueger's Pegasus Publications imprint from Buffalo, New York, U.S.A.

In his afterword, Krueger acknowledges that "this small booklet was more or less inspired by a similar venture of SSR Publications entitled Snowflakes in the Sun".