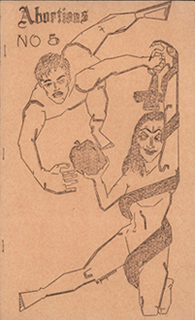 Published in Buffalo, New York, U.S.A., the first seven issues of Abortions appeared between mid-1951 and Winter of 1952. The seventh issue was titled "Abby". The final issue didn't come out until 1955, and consisted entirely of blank pages.