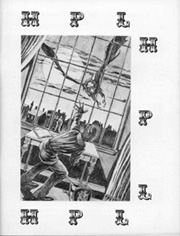 HPL
March 1972
Cover art, "The Haunter Of The Dark", by Robert Kline

HPL is a fanzine by Meade and Penny Frierson devoted to H. P. Lovecraft.

Also included was an interview with Frank Belknap Long, by Stuart Schiff.