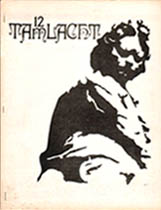 Contributors of articles, essays, and reviews included Alfred A. Attanasio, reviewing Alastair Crowley's Magic in Theory and Practice, and an essay by A.A. Attanasio on "The Relationship Between Coleridge's 'The Rime of the Ancient Mariner' and the Tarot'; Robert Bloch offers "Notes on an Entity"; Roger Bryant, writing on the chronology of the "Necronomicon"; and Joe Punilia.

Contributions of fiction included "Beowulf and the Supernatural", "Upon the Edge of Winter", "Fungi", and "Slipstream" by A.A. Atanasio. "Fungi" is considered to be part of the Cthulhu Mythos, according to Edward P. Berglund.

Illustrations and photography were by Ronald Attanasio.

Tamlacht has been said to be connected to the now defunct New England Institute of Metaphysical Studies.