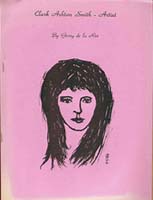 Gerry de la Ree published this memorial to the weird fiction writer and artist Clark Ashton Smith in 1973. Smith's writing and poetry had become popular in Weird Tales magazine in the 1930s as well as in the fanzines of that era. It is a 12 page one-time-only publication focusing on the artwork, both commercial and non-commercial, of Smith.

In the 1940s Gerry de la Ree had published zines a number of zines such as Sun Spots and Beowulf and, with Genevieve K. Stephens, co-published Loki.