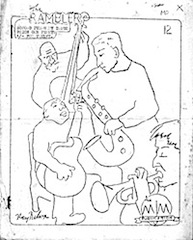 Rambler was one of a handful of fanzines devoted to folk music that were published in the 1950s and 1960s, along with John Brunner's Noise Level from the UK; in the U.S.A.'s Lee Hoffman published the first folk fanzine Caravan, followed by Gardyloo; others followed such as The Broadside of Boston, The Little Sandy Review, The Songmakers Almanac, and Tune Up. In Ontario, Canada, Hoot and Sing and String, and British Columbia, Canada's Singalong!; later in the UK other folk music zines, such as Folk Scene in the 1960s, and Folks, in the 1970s and 1980s would appear.