A Sense Of FAPA 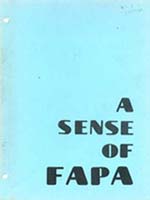 A Sense Of FAPA is a science fiction fanzine edited by Richard 'Dick' Eney.

It is 388 pages, and mimeographed on pale blue bond paper. As it was too large for any stapler, this fanzine is strap bound in a plain black folder. Approximately 150 copies were produced.

Richard Eney chose a selection of the best work published during the first quarter century of FAPA's existence. Introductions are by Harry Warner, Jr., Jack Speer and Richard Eney. Contributions include Jack Speer's science fiction fan history, "Up to Now"; "Mutation Or Death", John B. Michel's tract for The Futurians; and The Acolyte editor F. Towner Laney's "Oh! Sweet Idiocy!".

Writing is also included by Donald Wollheim (The Phantagraph, The New Hieroglyph, Terrible Tales of Tittering Terror) who founded FAPA, and to whom the fanzine is dedicated.