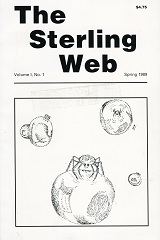 The first issue appeared in April 1989. By Winter 1991, six issues had appeared under this title when editor Amy Mann left, and Ann Kennedy changed the name to The Silver Web, and added the subtitle, "The Magazine of the Surreal". The fifteenth and final issue was published in January 2002. It was devoted to weird fiction and poetry, horror, fantasy, and science fiction.

Issue 7 featured a reprint of a short story by Charles Beaumont (Utopia) from 1957.

Ann Kennedy VanderMeer went on to become fiction editor for the revived Weird Tales, for which she won the 2009 Hugo Award, and then editor -in-chief. February 2012 will be her final issue as editor since the magazine was sold to new publishers.