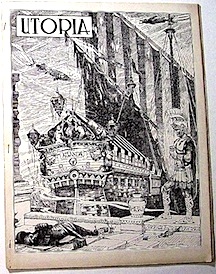 Utopia was a science fiction fanzine by Charles McNutt, the pen name of Charles Beaumont.

The first issue appeared May 1945. It featured cover art by Ronald Clyne. The articles in this issue included "Lovecraft and Music" by August Derleth, "The Trail of Caligari's Cabinet" by Harry Warner, Jr. (Horizons), "Poe and Music" by B. Meredith Cadman, "Autobiography" by Bill Watson (Diablerie, Sappho), and "Music and Me" by Hannes Bok.

Other contributions came from Willie Ley, Ralph Milne Farley, Malcolm Jameson, and others.

By 1948 Beaumont was living in Los Angeles, California, and under the imprint "Utopia Publications", published a portfolio consisting of eleven plates of Hannes Bok's illustrations. It was the first such publication not released by Bok himself.