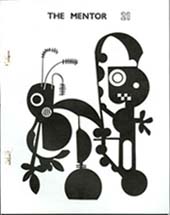 The Mentor (1965-2001) was a science fiction fanzine by Ron Clarke published in NSW, Australia.

The Mentor featured the regular columns "Grimesish Grumberlings" by A. Bertram Chandler; "The Yankee Privateer" by Buck Coulson, editor of Yandro, and a column by Mae Strelkov.

Issue 23 was a split zine with Girl’s Own Fanzine by Susan Smith-Clarke.