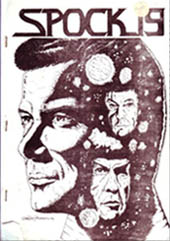 Spock (1976-1994) was a media science fiction fanzine published by the Austrek fan club.

Spock was published in Melbourne, Australia. Sixty-five issues were released during the run of the fanzine. It began in the 1970s as a fanzine for the Star Trek original television series, and later expanded to included other shows and movies based on Star Trek. It also included original fiction. Lillian Forbin edited the fanzine in the late 1970s, Linda Powell was one of the editors in the early 1980s, followed by Cherry Wolfe in 1985. In 1990 Wendy Purcell became editor, followed by George Ivanoff in 1993, John Prentice in 1994, Katharine Shade (The Captain’s Log) (from issue 69).