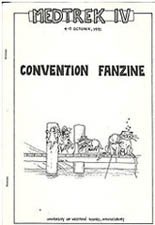 Medtrek consists of work by the finalists in the fiction and poetry competitions for the Australian National Media Convention. It features fan fiction inspired by the television series Blake's 7, Star Trek (the original series), Star Trek: The Next Generation, and other fandoms. The first issue was published in 1982. Four issues were released, the last in 1991.

Susan Smith-Clarke also published the fanzines Beyond Antares and Chronicles.