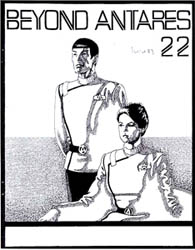 Beyond Antares was released in Faulconbridge, N.S.A., Australia. It was for a long time the official fanzine of the club Astrex. It became one of the longest running Star Trek publications in Australia. It was published from 1975 till 1993. Each issue was between 30 and 40 pages and featured fiction, poetry, art, and reviews. 36 issues were produced. In 1992, a special 20th Anniversary issue was published, with a colour cover, 200 pages, a complete index and cross reference to all previous issues of Beyond Anteres.

Beyond Anterres is included in the Susan Smith-Clarke Zine Collection at The National Library of Australia.