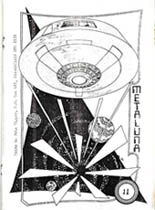 Metaluna is a media science fiction fanzine by John Tipper.

Published in Strathfeld, New South Wales, Australia, forty five regular issues appeared plus several "specials", from April 1986 to 1997. The editor described it as "a media science fiction media fanzine with regular excursions into original fiction and art." it featured short stories, articles, and artwork, some of the content was devoted to such television series as Blake's 7, The X Files, and Babylon 5, and movies such as Forbidden Planet, and Dr. Strangelove.

Metaluna is included in the Susan Smith-Clarke Zine Collection at The National Library of Australia.