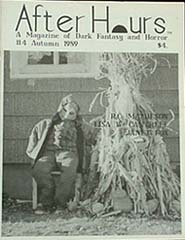 After Hours was a literary fantasy and horror zine by William G. Raley.

After Hours was first published in 1989 and continued on into the 1990s. Five issues of this title were published by Raley in California, U.S.A.

The stories "Ule", by Arthur William Lloyd Breach, and "The Last Show a Verdi's Supper Club", by Stephen Mark Rainey, are considered by Edward P. Berglund to be an integral part of the Cthulhu Mythos.