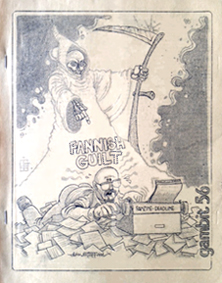 Gambit was published in the U.S.A. More than 50 issues were released. Issue 56 was released in August 1982.

Contributors of art work include Lee Hoffman (Quandry), Bill Rotsler, and Dan Steffan (Boonfark). Cover art work was by Dan Steffan, among others.