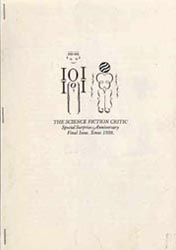 The Science Fiction Critic was a science fiction fanzine by Claire P. Beck.

No. 2, December 1935, included the first appearance of editor Beck's column "Hammer and Tongs" and the article "A Slip-Back in STF" by James Blish (The Planeteer).

No. 5, June 1936, includes a page by Hogo Gernsback concerning the discontinuation of Wonder Stories.

No. 6, December 1936, is the first issue to be published in Lakeport under the Futile Press imprint. Contributors include Frederik Pohl (The International Observer of Science and Science Fiction).

No. 8, March 1937, includes the article "Extrapolation - And Error", by John W. Campbell, Jr. and an article on Clark Ashton Smith's stone carvings and an announcement of two books to be published by The Futile Press.

No. 9, May 1937, includes the article "Was Weinbaum Great?", by Sam Moskowitz (Helios) and a letter from Clark Ashton Smith concerning the death of H. P. Lovecraft.

No. 10, July 1937 includes the unsigned article "Some Notes On Lovecraft" and came with a supplementary advertising leaf announcing the Futile Press publication of Clark Ashton Smith's Nero And Other Poems.