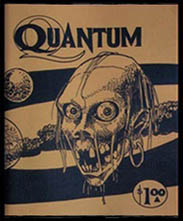 Poetry was by Reed Andrus and Jessica Amanda Salmonson (The Literary Magazine of Fantasy and Terror, Windhaven).