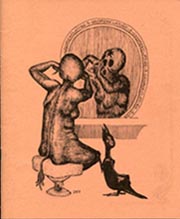 Gnomenclature was a perzine circulated among the science fiction fandom community. It was published in Cincinnati, Ohio, U.S.A. in the 1970s. Issue three was released in 1978, and issue four in March 1979.

Al Curry was also one of the co-editors of Quantum. An interview with Al Curry by Dave Locke appeared in Outworlds in 1988.