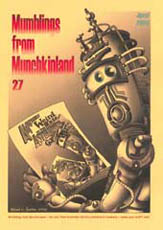 Mumblings from Munchkinland is a science fiction fanzine by Chris Nelson.

Chris Nelson started the fanzine in 1989 as a way of staying in touch with friends while Chris was away from home. It has been published in various locations, starting with Pakistan, but Chris is originally from Australia. It has also been published from Fiji, New Delhi, Samoa and Tasmania. 30 issues have been released so far.

Every other issue features a parody cover of an old science fiction pulp magazine or prozine, usually alternating with an original illustration from the Oz series of books.

Mumblings from Munchkinland covers Chris Nelson's personal life but has also featured interviews with Australian fanzine pioneers Bert Castellari (Futurian Observer, Zeus), Graham Stone, and William Veney, all of whom worked on some of the earliest fanzines coming from Sydney, as well as including a special feature in issue 28 on Roma Castellari, the first female member of organized fandom in Australia, who began working on fanzines with her contributions to Zeus. Chris has also written articles on Rosemary Simmons, Norma K. Hemming, Laura Molesworth and Norma Williams and the first Australian woman-run fanzine Vertical Horizons, and many other highlights from the history of Australian fandom.