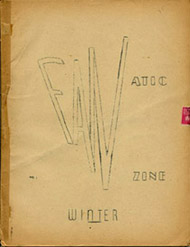 Fanatic Fanzine was a science fiction and fantasy zine edited and published by Bobby Pope in Charleston, South Carolina, U.S.A.

It appears that only two issues were released, the first in Winter 1950 and the second in July 1951. According to Pavlat and Evans' original edition of Fanzine Index issue 3 was re-titled Fanatic Zine, and appeared in February 1952.

Lee Hoffman announced the first issue in the pages of Quandry; "Thumbing thru fmz received recently we find several new ones. FANatic FANzine from Bobby Pope - SW Hill & Hanover Sts - Charleston, S. C. A quarterly which sells for 15¢ a copy FAN FAN is the O-O of no organization."

Lynn Hickman (TLMA, The Little Corpuscle) recounts a story about Bobby Pope in the pages of Mimosa #10 (1991); "I drove my brand new Mercury convertible to the 1951 Worldcon. On the way I picked up Fred Chappell in Canton, North Carolina. I stopped in Charleston, South Carolina and picked up Bobby Pope, then I went to Atlanta and I picked up Ian Macauley and Walt Guthrie, and we took off for New Orleans. I met Rich Elsberry there, and we decided to leave the convention for a little bit and take a trip through New Orleans and see the scenery. Besides myself there was Ian Macauley, Max Keasler, Bobby Pope, Rich Elsberry, and Bobby Johnson. And every time we went past a Confederate statue, Bobby Pope had to stand up and salute, because he was a real southerner."