From ZineWiki
(Redirected from Factsheet 5)
Jump to navigationJump to search 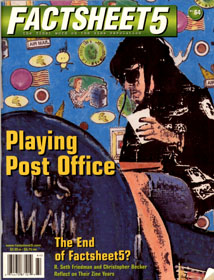 F5 was founded in 1982 by Mike Gunderloy, who began the review zine as a two-page dittoed publication. It grew it into the premiere place to get your zine reviewed and read zine reviews (it also featured independent music reviews). Cari Goldberg Janice became co-editor in the late 1980s and for a few issues in the early 1990s Jacob Rabinowitz was also a co-editor. Shortly after Gunderloy and Goldberg Janice published the 1991 book "The World of Zines," which compiled a number of zines featured on the pages of Factsheet 5, Gunderloy quit the magazine. By that time Rabinowitz had left and Goldberg Janice was starting a family. Hudson Luce, a fan of Factsheet Five, stepped forward and put out a single issue of the zine: #45. Despite enlisting the help of Mark Bloch, publisher of the mail art zine, Panmag and the writer Jim Knipfel, both of whom had written columns for Gunderloy, Luce was rumored to have ruined things on the business end.

Jerod Pore then started maintaining an electronic version of F5 on a website called The Well when he realized Hudson would not publish another issue. This was in the early days of the Internet and began after Pore suggested to Luce on alt.zines he put the reviews online. Pore in Second Guess #6 said, "Next thing I know, Hudson calls me on the phone, gets my address and sends me 350 pounds of zines." A number of different zines volunteered copies of their reviews to Pore for the website as well, including Maximum Rock'n'Roll, Fucktooth, 10 Things Jesus Wants You To Know, Holy Titclamps, and Second Guess.

In 1992 R. Seth Friedman stepped in, picked up the pieces, and published F5 throughout the 1990s, once again bringing it into prominence. The electronic version at The Well ran the reviews from the print version a few months after each issue came out until 1994. Factsheet Five, at its height with Friedman and Editor Chris Becker, had approximately eight contributing editors and twenty regular contributors and freelancers. It was actually a profitable magazine, its annual gross was estimated at $130,000. Friedman got Factsheet Five national distribution and attention and also published The Factsheet Five Zine Reader in 1997, a book compiling 73 extracts from zines featured in the magazine (not unlike Gunderloy's book from six years ealier).

The last issue of Factsheet Five was published in 1998 by Friedman. There have been rumors for the past five years of a fourth editor stepping in to bring Factsheet 5 back to life. So far all that's materialized is a yearly announcement on alt.zines about its return "this year" and the magazine's website is updated occasionally to say F5's return has been delayed.