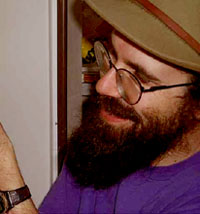 Mike Gunderloy founded Factsheet Five in 1982 and is generally credited as the person most responsible for the zine explosion that followed in the next 15 years. Today on his personal website, he calls Factsheet Five "the stupidest time-saving idea I ever had", somewhat in jest. Under Gunderloy's control, it grew from a two-page photocopied sheet to a regularly published zine packed full of reviews each issue. At first it reviewed everything under the sun, but soon F5 became focused on zines and the small press. With this transformation and development, Factsheet Five (aka F5) became the first major review zine.

Cari Goldberg Janice joined F5 in the late '80s and became co-editor, Gunderloy and Goldberg Janice published the zine together. In 1988 Gunderloy's book How To Publish A Fanzine was published by Loompanics Unlimited, followed the following year by a 54 page zine entitled Why Publish? During this period, Gunderloy became a spokesperson for the zine community. He was interviewed about zines constantly and authored a number of articles about the small press. He frequently contributed zine reviews and articles about the self publishing world to The Whole Earth Review. In one of these, he described zines to the general public thus: "Zines are the periodicals that live in the cracks between the major journals you can find on the newsstands. They are published all over the country, circulate primarily by mail, and are done for love rather than money. Because they're hobbies rather than businesses, zines can be freer in what they say. But this also means you have to be more patient in dealing with them. The typical zine publisher comes home after a long day at some real job and then spends another six hours writing, designing, and trying desperately to answer her mail. Be patient when you write. Send a stamped, self-addressed envelope if you want more information. Send well-wrapped cash, or checks made out to the person doing the publishing rather than the name of the zine, which probably doesn't have a bank account. And above all, be prepared to be surprised, entertained, outraged, amused and informed by these, the irrepressible outlaw publishers of the world."

In 1992 Gunderloy and Goldberg Janice wrote The World of Zines: A Guide to the Independent Magazine Revolution for Penguin Books. The book compiled some of their favorite zines from the pages of F5. Soon after, The World of Zines appeared. The zine scene was exploding, essentially right when the spotlight was on him, Gunderloy became overwhelmed and had a nervous breakdown. He quit Factsheet Five, stopped talking about the small press and became a computer programmer. Gunderloy donated his massive zine collection from his days as editor of Factsheet Five to the New York State Library, creating the largest public library zine collection in the world. Over 4,000 of the 10,000 zines can be searched via the libraries' catalog.

After Gunderloy quit, Factsheet Five, Hudson Luce produced one issue, then R. Seth Friedman continued the magazine (with contributing editor Chris Becker) until it ceased publication in late 1998. Gunderloy has since raised a family and authored dozens of books on computer software and training.