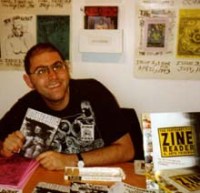 Seth tabling at a zine convention in Seattle

Under Friedman's helm as publisher, Factsheet Five was published quarterly on a consistent schedule from 1991 until it folded in 1998. He gained mainstream media attention during the 1990s when zines became popular, and was often featured in panel discussions about the medium. Friedman also published his own zine called Food for Thought. Eventually he burnt out and decided to stop publishing Factsheet Five. Friedman claimed he would be starting a publication doing wine reviews, but the publication has not appeared, and Friedman has ceased participating in zines.

Although he did not cooperate with the filmmakers, Friedman is featured briefly in Capturing the Friedmans, a documentary about his family.

He has recently moved to Portland, OR with his wife.