Murder Can Be Fun 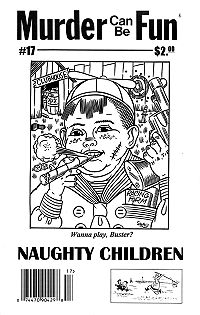 Murder Can Be Fun is the infamous zine of bizarre death, murder, mayhem, crime, disaster, weird books and even weirder people.

John Marr began publishing the zine in 1986 out of San Francisco, CA. This long-running zine has been in existence for more than twenty years. For each issue Marr painstakingly researches murders and deaths, documenting them in an entertaining way. Devoted to the "underside of human curiosity," topics have included postal massacres, Karen Carpenter's anorexia, assassination attempts on Andy Warhol, the Tacoma Narrows Bridge, historical cannibals, faith healing, Fatty Arbuckle, Cornell Woolrich's fiction, and many more bizarre subjects not often addressed in the mainstream media. This digest-size, photocopied zine started at 16 pages and grew to 48 pages in later issues.

Murder Can Be Fun was featured in The Factsheet Five Zine Reader that was published in 1997, as well as in 1992's The World of Zines.