10 Things Jesus Wants You To Know 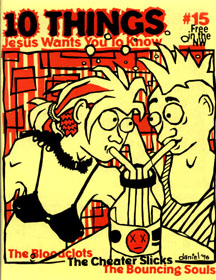 10 Things Jesus Wants You To Know was a zine published in Seattle, WA., U.S.A., by Dan Halligan. It focused on punk and rock music, along with DIY culture. The title was taken from a religious pamphlet, and Halligan occasionally claimed that it caused the zine to be misinterpreted.

10 Things was published from 1991-2000; there were 22 issues. Each issue was full-sized. Issue #1 was photocopied, issues #2-18 were offset black and white printed (some with color covers), issues #19-22 were newsprint with glossy covers. The last dozen issues averaged 80 pages, with print runs of 3,000. 10 Things was the largest zine in the Pacific Northwest for most of its existence and was available for free in the large cities Washington, Oregon, Montana, British Columbia and Alaska. Each issue included a large number of columns, band interviews, music related articles, music and zine reviews, a cooking column, fashion advice, photography and more. Half of the content was oriented around the Pacific Northwest music community. It was a zine that caused some controversy because of its sometimes critical reviews, but was also laced with a lot of humor.

Articles from 10 Things were featured in the fifth edition of the Zine Yearbook and Ben Weasel's book "Punk Is A Four-Letter Word." Back issues of the zine are cataloged at the University of Washington, where Halligan works as a library manager.

Today 10 Things is online only as a blog.

#12: Neurosis, DOA, the VSS, the Vandals, the Drags, the Lunachicks, columns, rants, reviews