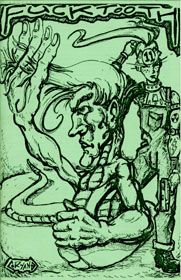 Fucktooth was perzine published by Jen Angel out of Columbus, OH.

Fucktooth was published from 1991 to 2000 and was a widely circulated zine. Each issue covered Jen's personal life, her love of music, sex, progressive political issues, and more. Other writers from the punk community often contributed to Fucktooth as well. In later issues Jen focused interviews on people she admired in the punk and zine communities as well as more talk about sex and relationships. The last issue of Fucktooth published in 1999 was #24, although there were plans for issue #25 documented in the 'upcoming' section of earlier zines.

Fucktooth #19 is included in the Sarah and Jen Wolfe Zine Collection at The University of Iowa.