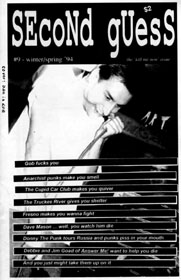 Second Guess was a Reno, NV zine published by Bob Conrad during the 1990s. The zine was 8.5" X 12", folded in half, photocopied black and white, and was at the crossroads between being a perzine and punk fanzine. Each issue contained stories from Conrad's life, his thoughts and rants, live music reviews, reader mail and responses, interviews, guest writers, and music and zine reviews.

The title Second Guess was a play off the title of another Reno zine Second Chance, which was published by Kevin, the lead singer of the seminal hardcore band 7 Seconds.

#9: Interview with Debbie Goad and Jim Goad of ANSWER Me!, article of touring Russia by Donny The Punk, columns, reviews and editorials.