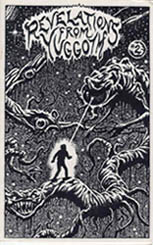 Revelations from Yuggoth was a weird fiction fanzine edited by Shawn Ramsey, and published by Cryptic Publications.

Three issues of Revelations from Yuggoth appeared in the 1980s from Mount Olive, North Carolina, U.S.A. The first issue appeared in November 1987, the second in May 1988, and the third, and last, in February 1989.

Contributions including "Devil God'" by Lee Barwood, "Headcase" by Carrie Hall, "Wilber Whately Waiting" by Robert M. Price (Cthulhu Codex, Crypt of Cthulhu), "The Cryptic Power" and "The Hungry Place" by Wilum Pugmire (Queer Madness), "In the Airlock" by Ann K. Schwader, and "The Contemplative Sphinx" by Richard L. Tierney, all of which are considered to be part of H. P. Lovecraft's Cthulhu Mythos.

The cover for issue #1 was by Shawn Ramsey, #2 by Allen Koszowski, and #3 by Peter Smith.