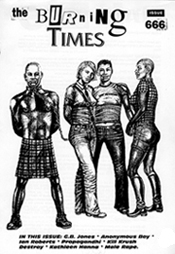 The Burning Times (February 1995-?) was a queer punk zine published in Australia by Richard Watts.

The first issue of The Burning Times came out in February of 1995, and six issues were subsequently released. The zine featured interviews with bands such as Pansy Division, De-Regulator, Tedium, Mouthful, Tuff Muff, Kill Krush Destroy, and Propaghandi; musicians such as Matt Thomas of the band The Mavis's, Wally Gunn of Sickbay, Chris Debono of Silpheed, and Skin of Skunk Anansie; and personalities such as Kathleen Hanna, G.B. Jones and Anonymous Boy.

Each issue also included reviews of zines such as The life and times of Mavis McKenzie, The Assassin and The Whiner, Aunt Franne, Dazed and Swarming, Embryo, Grot Grrl, Hellcats, Krakatoa, The Miraculous Indulgement of the Hairball Goulash, Mother Earth, Ms.45, Outpunk, PMS, Prong, Psychobabble, Queer Zine, Sekhmet, Spammy, Speed Demon, Subversive Behaviour, Sure, Survival, Thunderpussy, Vilification of Venus, Where Were You In '77?, and You're So Hideous.

Although international in scope, the zine as well provided a valuable snapshot of the queer, punk and independent music scenes in Australia in the 1990's.

Format/size: Photocopied A4 cut and paste, around 50 pages per issue