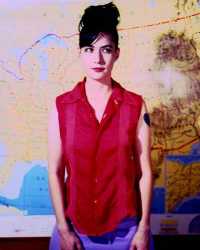 Kathleen Hanna (born 12 November 1968) is a musician, zine writer and one of the founders of the Riot Grrrl movement.

Hanna was born in Portland, Oregon and attended The Evergreen State College in Olympia, Washington in the late 1980s, where she published zines and got involved in underground music and running an art gallery. Hanna and Tobi Vail, editor of Jigsaw, did a zine called Revolution Girl Style Now and, together with Kathi Wilcox, wrote the zine Bikini Kill as a response to what they saw as sexism in the punk rock scene. The three women then formed a band of the same name. After Bikini Kill relocated to D.C. in 1991, Hanna contributed to the zine that Allison Wolfe and Molly Neuman, editors of Girl Germs and founders of the band Bratmobile, were publishing, called riot grrrl, which helped motivate the emerging feminist sentiment in the punk scene with a call to action. The result was an exciting movement called Riot Grrrl that captured national attention and was the inspiration for quite a few zines and bands. When Riot Grrrl came under intense corporate media scrutiny and exploitation, several women called for a media blackout and this eliminated the movement's presence in the mainstream media; however, it carried on underground and it's effect on the music and zine scenes continue to last to this day.

After Bikini Kill, Hanna recorded a CD with friends, called The Fakes, and a solo album, Julie Ruin, and then met zine editor Johanna Fateman, co-editor of Snarla, who gave her one of her zines to read. In Portland, the two formed a band called The Troublemakers, named after the film of the same name by G.B. Jones. This band broke up when Fateman moved to New York. Hanna soon followed her friend to the East Coast, and the two began another band with Sadie Benning, the popular electronic feminist band Le Tigre. After the first album Benning left, to be replaced by JD Sampson. The band recorded a number of albums before going on hiatus in 2006. In the summer of 2006, Hanna married Adam Horovitz of the Beastie Boys.