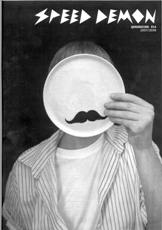 Speed Demon is a zine published in Italy by Flavio and the Speed Demon crew.

Thirteen issues of this queer zine have been released in the 2000's. The content is wide ranging, usually focused around bands, art, and queer happenings and activism in Italy and elsewhere. Interviews with bands such as Xiu Xiu, Kids Like Us, King Cobra, Best Revenge, The Plath, USAsexual, Harum Scarum, and The Little Deaths are featured. So are the people behind labels like Agitprop! Records and Spitshine Records, and distros such as Kweer Corps. The films Rise Above: A Tribe 8 Documentary and Malaqueerche have been spotlighted, as have artists Tommy Kovac and Pierre Beaudoin. Articles on topics like 'Gelding', 'Pleasure', and 'Queer Pakistan' have also been included in this almost 100 page zine. Although the zine is in Italian, photographs and graphics are a prominent feature and new issues generally come with an English translation for readers outside of Italy.

Speed Demon is still being published.